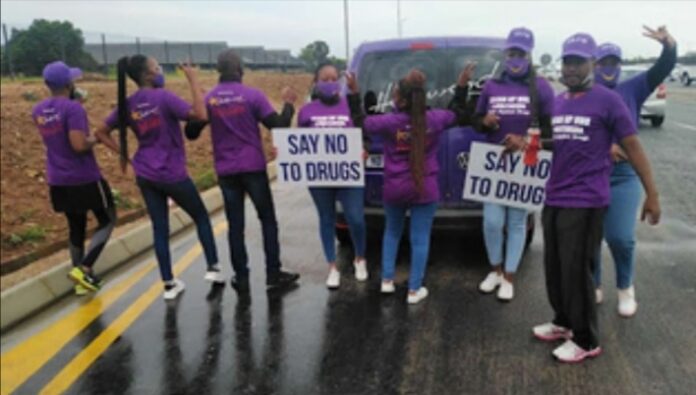 A group of young people marched from Joburg to Pretoria to raise awareness about drug abuse and were welcomed with praises in Soshanguve. The march took place on 3 December and 4 December 2021.

The Soshanguve Police greeted them outside the Soshanguve Magistrate’s Court and accompanied them through the bustling streets till they arrived at Mabopane railway station.

Mr Khutsi Malala, who is the activist and Clean-Up Hub founder who led the walk, said that after years of combating nyaope and making significant efforts to remove it from communities, crystal meth was now emerging as a major problem.

He said drug traffickers were recruiting young people at schools by providing them with the substance for free until they became addicted.

“This drug is also easily accessible because the dealers are everywhere. They sell a joint for around R100. It is a very addictive drug that makes users dependent on it.

:We used to have around 20 parents looking for assistance for their children on a daily basis, but now it has grown to around 80 people needing assistance”.

The community members of Soshanguve said it was remarkable to see young people get up and raise their hands to lead such an important endeavor in a country that really needed it.